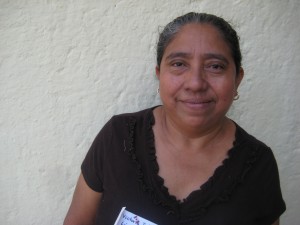 This is an interview with one of our students, Victoria Isabel Lopéz Lopéz, from La Agradía de la Esperanza.

When I began I didn’t know anything. I wanted to serve but I was scared. I had dreams and everyone told me I should become a comadrona but I was afraid. I got sick and I suffered a lot as the years passed. I suffered and suffered with a lot of bleeding. I went to doctors and to comadronas but they couldn’t find any reason for it. They said everything was fine. I visited another person and they told me that I was suffering because I was supposed to become a comadrona. I was still afraid. I didn’t want to. My husband was jealous and didn’t want me to work either but in the end he accepted it.

When my sister became pregnant with her sixth child, my brother-in-law suggested that I should start with my sister. I had looked after her other babies after they were born and he had always told me I should become a comadrona.

The first time I touched her stomach, it seemed really big, not normal. I didn‘t know much but I knew it wasn’t normal so I sent her for a check-up with a doctor. The doctor told her she had lots of liquid but that everything was normal and it was fine for her to give birth at home.

I felt more assured. But then she began her labour early. It was only seven months.

In the beginning, for a short time, everything was fine, normal. She had pains and then came time for the birth. My sister was guiding me as she had had other children and knew what to do. The baby was born without problems and we waited for the placenta. I touched her stomach and felt something move!

“There’s another child!” I told her.

I don’t know if it was the shock of it or for some other kind of weakness but she fainted.

My brother-in-law went to find a doctor. When the doctor entered she looked at me and asked, “Why haven’t you cut the cord?”

I didn’t say anything. I had thought of it, but my brother-in-law had told me to wait for the placenta. Since I didn’t know much I listened.

The doctor told me I should have, that the baby doesn‘t need the placenta after it is born. Now I know and if the placenta doesn’t come quickly, I cut the cord. I learned this that day. I cut it while the doctor examined my poor sister and confirmed that there was another baby and that it was still alive.

The doctor gave my sister an injection and began to stimulate her so the pains began again. My sister woke up and gave birth to another baby. The doctor gave her some pills for an infection she had and then left us.

Word got out that I had delivered my sister’s twins and since that day, 25 years ago when I started to work, to serve as a comadrona, it hasn’t stopped. I’ve delivered more babies then I can recall. There are months when it’s only two but four or five is more common. As I gained experience, more and more people asked me to assist. All because my sister and her husband gave me the opportunity.

We had another very rewarding time teaching 61 traditional midwives this past Feb/Mar! We spent...

Once again, we are in the midst of getting ready to head off to the...

The Safe Motherhood Project is thrilled to announce we are now officially a member-project of...

I’ve added a detailed history of the Safe Motherhood Project and an outline of the...

We’ve come to the end of our time in San Pedro Sacatepequez-two successful courses teaching...